We seek to keep this a Christ centered church with a warm and friendly heart, an open mind, and an adventurous spirit.
Visit Our Facebook Page
Online Giving, Visit the CHOTF Store
Leadership
Rev. Dr. Michael Holland

“Pastor Mike” has been minister at Church of the Foothills UC & DOC in Santa Ana since 1997. Church of the Foothills is a progressive, Open and Affirming, peace and justice loving congregation that welcomes and affirms people of every ethnicity, age, gender, sexual orientation, different ability, economic status or religious background. Dr. Holland also has taught classes in religious studies and philosophy at Orange Coast College in Costa Mesa since 1995. He actively participates in Progressive Christians Uniting, The Clergy Task Force of Planned Parenthood, and the Interfaith Council of Central Orange County. He has helped lead educational, interfaith and peace mission trips to Greece and Turkey, China, Nicaragua, Cuba, Jordan, Israel and the Palestinian territories. He also conducts workshops in spiritual gifts using the Myers-Briggs Personality Type Indicator.

Pastor Mike and his wife Tricia live in Cypress and have two grown sons. His passions include golf, biking, travel, history, reading and healthy spiritual living. A “Son of the South” Pastor Mike has family roots in North Carolina predating the Declaration of Independence. He was raised as a Southern Baptist, a Democrat, and an Air Force brat, living in ten states the first fourteen years of his life. He graduated with an AA degree in 1976 from the University of South Florida in Tampa, a BA in religious studies in 1978 from Stetson University, DeLand Florida, and a Master of Divinity in 1981 and Doctor of Ministry in 1988 from the Southern Baptist Theological Seminary in Louisville, Ky. He has also done extensive continuing education at Pacific School of Religion, Berkeley; School of Theology at Claremont; and the Disciples Seminary Foundation, Claremont, CA.

Pastor Mike loves to preach, teach and work with children and youth. He also has a passion for social justice for all people. In June 2008, he performed one of the first legal same-sex marriage ceremonies in an Orange County church, which was featured prominently in the Orange County Register. A leading opponent of Proposition 8, Dr. Holland was interviewed by NBC LA Channel 4 and other news outlets, and was voted by readers of the OC Weekly as Orange Country’s Best Political Pastor. Dr. Holland also participated in two documentary films in support of the GLBTQI community. Church of the Foothills is host to TG Rainbow, a support group for Transgender people, and SHIFT HAPPENS, a support group for family and friends of Transgender people. 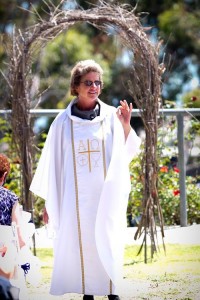 Kel Henderson is a Southern California native and grew up in both the Disciples of Christ and United Church of Christ denominations. She holds a BA in Religion from Chapman College and a Masters of Divinity with an emphasis in Cross Cultural Studies from Fuller Theological Seminary. She has been an ordained Disciples of Christ minister since 1997 and has been called to both DOC & UCC congregations. In her ministry, she has served in the local parishes, and as a prison and hospital chaplain. She has worked in youth and young adult ministries, and spent time as a missionary to China. Kel is an energetic person and an “out of the box” thinker who loves to work in group settings. She has a creative spirit and great love for adventure which can be experienced through her worship and teaching style.
Email: ChristianEducation@chotf.org 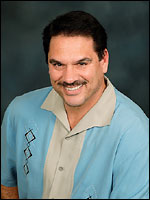 A native Californian, Robbie Arevalos has been involved in Youth Ministries for twenty years. He has participated in both the UCC and DOC regional as well as national events. Robbie has also served on both youth leadership groups in the region and is currently on the Disciples of Christ YLT! He loves working with all ages of children and spends at least one week each summer at camp! Robbie begins his seventh year at CHOTF this January and is looking forward to many more years with his church family!